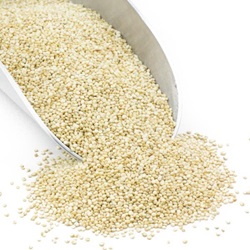 Description
Nutritionally, quinoa might be considered a supergrain--although it is not really a grain, but the seed of a leafy plant that's distantly related to spinach. Quinoa has excellent reserves of protein, and unlike other grains, is not missing the amino aicd lysine, so the protein is more complete (a trait it shares with other "non-true" grains such as buckwheat and amaranth).

The World Health Organization has rated the quality of protein in quinoa at least equivalent to that in milk. Quinoa offers more iron than other grains and contains high levels of potassium and riboflavin, as well as other B vitamins: B6, niacin, and thiamin. It is also a good source of magnesium, zinc, copper, and manganese, and has some folate (folic acid).

Quinoa cooks quickly to a light, fluffy texture. As it cooks, the external germ, which forms a band around each grain, spirals out, forming a tiny crescent-shaped "tail," similar to a bean sprout. Although the grain itself is soft and creamy, the tail is crunchy, providing a unique texture to complement quinoa's delicate flavor.